I have been on a magic-user binge lately in Lamentations of the Flame Princess and the one thing I really like about some of the spells are their chaotic, ride the lightning nature. I also have an affinity for magic-user chess, or trying to foil other users of the arcane arts through counter spells and preparation. In spirit of that, I have tried my hand at a fun little shielding spell based around the premise of a magic mirror. 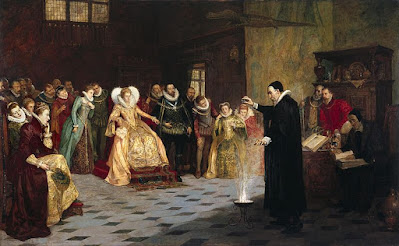 The caster is shielded by an energetic mirror.

1. The magic-user specifies a single spell. When the specified spell is cast on the magic-user, the shield will reflect the magic and change the target of the spell to the person casting it. An area of effect spell that triggers this effect changes the area of effect to being centered on the caster. Reversible spells must be specified. For example, light will not reflect darkness. This does not reflect cleric spells (unless using EC magic rules). The mirror also cannot reflect dispel magic. Reflecting a spell ends tactician's mirror.

2. The magic-user shapes the mirror into a prism. The next single target spell cast on the magic-user is duplicated on 1d6 random targets within the range of the spell. This does not effect cleric spells (unless using EC magic rules). If the spell cast is reversible, half of the refracted spells are inverted. Determine the targets of these inverted spells randomly. Refracting a spell ends tactician's mirror.

4. The magic-user shapes the mirror into a distorting lens. The next time a spell targets the magic-user, area of effects included, the mirror distorts the spell into a different result. Roll a d6. (1) A different random spell is cast on a random target. (2) The spell has the opposite effect. If this spell is reversible, it reverses. If not, the referee rules a narrative inversion. (3) The spell is amplified; double the range, duration, and potency. (4) The spell is reduced: half the range, duration, and potency. (5) The mirror changes the magical energy into a scroll that drops to the ground. This scroll can be used like a normal scroll and contains the spell that was cast. (6) The  mirror siphons the spell into the mind of the mirror protected person. They learn the spell if level appropriate. They lose a random spell as a result (not tactician’s mirror). If not level appropriate, they become aware of the spell and will have a reduced time (50 percent) of researching it should they encounter it again. Distorting a spell ends tactician's mirror.

Miscast Table for VAM and EC:

1. The mirror shatters upon being cast, giving the magic-user cosmically bad luck. The next time the magic-user rolls a magic saving throw, they automatically fail.

2. The theft of the energy from the mirror dimension draws the attention of the malevolent figures of the glass world. For 1d7 days, these figures purposefully distort images seen in glass and always do so at the caster’s peril. The spell goes off as normal.

3. The caster forms the mirror out of looking glass energy. Treat the mirror as normal until it triggers. Instead of having the specified effect, the looking glass eats the spell and arranges itself into a temporary portal to A Red and Pleasant Land. This portal lasts for 1d4 days.

4. The caster erects a window instead of a mirror. Other versions of the caster in other worlds become aware of the caster through this window and can see them for the duration of the spell. Treat this like a crystal ball for casting spells over long distances (i.e. they can see each other and cast spells on each other like they were in 10’ range).

5. The mirror energy fractures the caster into 1d6 duplicates. Divide the casters hit points among these vessels. The caster is not sure which vessel is real. This effect lasts for 6d6+6 turns (always 666 isn't it?). All duplicates take the same actions and behave identically.

6. The caster loses control of the mirror energy and causes a mile large area to merge with the mirror world. This effect lasts for 1 hour. During this time, all spells within the area act as if their target has a random tactician’s mirror cast upon them.

7+. Refer to miscast table, inside front cover of VAM.

Special thanks to Ignacio Bergkamp for feedback and soundboarding. You are a gentleman and a scholar. You can check out his blog over at https://getrealroleplaying.blogspot.com/